So if you guys haven't heard yet, the Feelies are definitely recording a new album. My dad says they have 6 or so songs, not all of which have been rehearsed enough to play live. He also said the album will be called "Stanley" or "Stanley is the Greatest Drummer in the World" (and yes, he was joking). Anyways, the Feelies are talking about starting to rehearse for the new album this June sometime.

I did go to the show in Connecticut in March and it was a lot of fun, and I'm quite jealous of those who got to go to the show in Philly yesterday. The will also be playing on July 2nd, 3rd, and 4th at Maxwell's.

Anyway so the new songs that the Feelies have played live will be on the album, such as "Time is Right," "Bluer Skies," and my favorite, "Nobody Knows."

Also, please come out to see my aunt and uncle Toni and John Baumgartner, cousin Michael Baumgartner, and our family friends Marc, Dan, and Ian Francia play in a new incarnation of Speed the Plough at Maxwell's on May 26th I believe. Check the Maxwell's website in the future to be sure as the show is not listed there yet. It'll be fun!

My mom will also be updating www.stanleydemeski.com relatively soon, so check that for updates too!
Posted by Katie at 6:02 PM 3 comments: 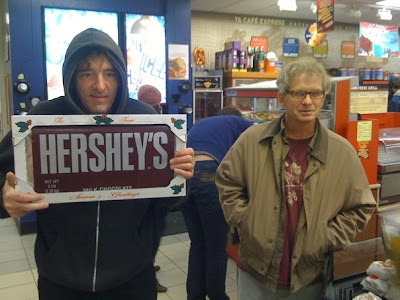 My dad said this was taken at a rest stop at around 4 in the morning coming back from Boston. Andy Peters, the Feelies' sound man took it.
Posted by Katie at 9:09 PM 1 comment: