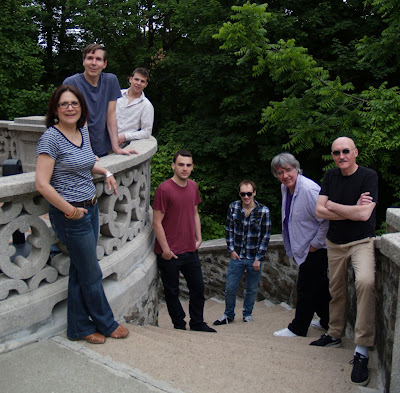 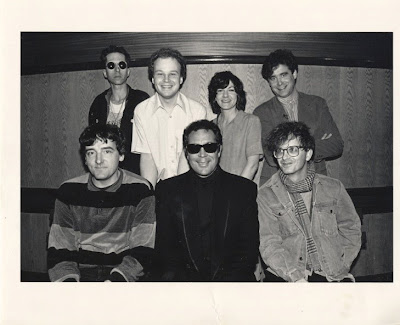 So on April 16th I went to the "Last Great" Culture Shock festival at SUNY Purchase with a few of my girlfriends.

Since the weather was terribly nasty yesterday, the shows were relocated to the student center, which, as mentioned above, is widely known as the Stood. The Stood appears to be entirely student-run, and they did have a few very cool features such as old arcade games, two stages, murals painted by students, and a life-sized chess set. However, the Stood was pretty damn skeevy. It was not clean at all, the bathrooms were atrocious (not to mention the ceiling was leaking in the women's room), the murals and graffiti left nowhere for the eye to rest, and I kind of felt like I didn't want to touch anything there to be quite honest. Luckily, my dad said we could hang out in the green room and that provided us with someplace clean and quiet to sit down.

The first band I really paid attention to was Talk Normal. They were comprised of two ladies: one who sang while sitting up very straight on her drum set and one who played guitar and sang. They were a bit noisy (which I'm usually not a fan of), but I kind of really liked them anyway and plan on checking out their album(s?) soon.

Woods is actually a band that I've just started getting into, and I really enjoyed seeing them live. Although, they also could have done without the long jams in the middle of some of their songs. Otherwise, I really liked them. That was kind of predictable, though, because folky-indie-rock-ish music is usually right up my alley.

I've been listening to Real Estate for about a year and a half or so, so I was really looking forward to seeing them. They definitely didn't disappoint. They had a nice mellow energy, and I thought that their echoey and clean sound was surprisingly preserved in the Stood. The sound quality, though, also had to do with Andy, the Feelies' sound guy who handled Real Estate's sound as well that day. Anyway, Real Estate even dedicated a song to the Feelies "one of (their) favorite bands of all time." I was sooo excited about that. After Real Estate's set I even saw the bassist being a fanboy with Brenda, it was kind of adorable.

Next up was the curator himself, R. Steevie More. When I first saw him walking around, I thought he was just some eccentric old dude who liked to walk around with a globe on his head at music festivals. My friend Esha, though, pointed out that he had been announcing things, so we knew he must have been the curator. Anyways, my dad briefed me on who R. Steevie More actually was and what he's done musically before my friends and I watched his performance. It was hilarious, weird, and energetic. He sang songs about things like hamburgers, spinach, and not wanting to leave one's house. There were some points where he got really intense and his eyes looked like they were about to pop out of his head. Awesome.

Before I get to the Feelies' performance, I must say one thing: if you're at a show, don't sit on the stage while the bands are setting up. It's not cute. You not only get in the way, but you look obnoxious and disrespectful.

Anyways, I had expected the largest crowd for the Feelies because they were headlining that night, but what I didn't expect was for people to start moshing. I mean really, moshing to the Feelies? It happened, though. Not only that, people also stage-dived and crowd surfed. Bill actually told the audience to stop stage diving to no avail, but the real issue seemed to be people throwing stuff. Another word of advice on concert etiquette: don't throw shit, especially at the performers. Overall, though, I was able to dance with my friends while trying to maintain my footing in the crowd so it wound up being quite fun. The enthusiasm of the crowd was also really exciting to me (and my dad as well), even though more than one of the people that I had to fend off reeked of beer and/or rum, there seemed to be genuine fans in the crowd, as I found a lot of people singing along to the songs.

It wound up being one of the craziest nights I had in a while.

and the new album, Here Before, will be coming out this coming Tuesday, but I probably won't be making a full post until next weekend. I've got a term paper and a bunch of other crap to work on for school (cause I'm actually involved at school now hah). I also want to be able to post a bunch of pictures from the Culture Shock festival at SUNY Purchase next weekend (the Feelies are headlining Saturday). So what I will leave you with until then is this:

Also, a new Speed the Plough album is in the works. This is what the official facebook had to say about it:
"The new album will include Sunburst-era songs "Madeleine" and "(Love is) The Best Revenge," along with a cover of Lee Hazelwood's "Pour Man" and a slew of brand new tunes. With contributions from former Ploughsters Brenda Sauter and Rich Barnes, and introducing our new guitar-slinger and vocalist Ed Seifert."

Lastly, here are some links to different pages that you might want to "Like"/add:
The official Feelies Facebook (run by my mom and Bob Torsello)
My dad's Facebook
The official Speed the Plough Facebook

Longtime friend of the band Massimo De Vecchi also has a Feelies page that is endorsed by the band.

You can get the new album from places such as the Bar/None site, Amazon.com, iTunes, etc.