A Year After The Reunion 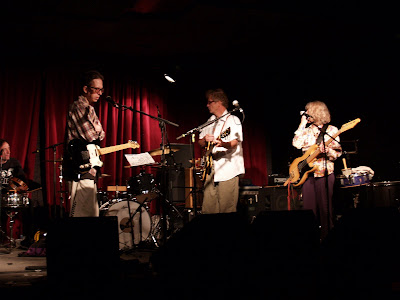 So the Feelies shows came and went and, again, they were amazing. On the first night, three of my friends came. One of them, Matt, was even at the sound check. The sound check itself ran a little late, but in the first hour or so, Glenn started playing "Billie Jean". Then Dave started singing in falsetto and playing his snare to the beat. It was absolutely hilarious and kind of made my day.

Anyway, so we ate at Maxwell's and my other friends, Dan and Liebold arrived. It was pretty packed that night, but we were able to get pretty good spots. As for the actual show, this year the Feelies started things out with some more mellow songs like "When Company Comes," and a cover of "Sunday Morning." New additions to the lineup included "Egyptian Reggae", "Moscow Nights", "Everybody's Got Something to Hide Except for Me and My Monkey," and "Invitation" (although, as mentioned in a previous entry, they added that song on New Year's Eve). There was even one new song, "Bluer Skies" on which Brenda's husband, Rich Barnes of Wild Carnation, even played keyboard on it while sitting on the little crate that is used as a step to get to the stage at Maxwell's. 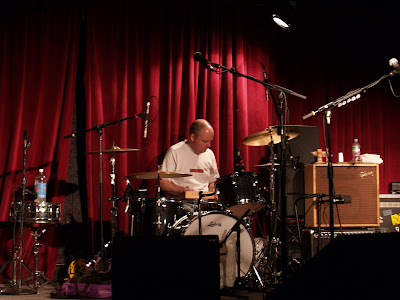 Friday night I went to the sound check with my dad because my mom and my brother were going to take the train after my mom got out of work. Anyway, Dave again started singing Michael Jackson when Andy the sound man told him he could sing into his mic if he wanted. So he sang "Thriller" and I felt the need to text Matt and inform him about it. I just chilled at Maxwell's for most of the afternoon, reading Under the Banner of Heaven by John Krakauer. The show was pretty much the same as the day before, except I was standing next to a particularly obnoxious tall drunk man who got more and more drunk as the night progressed. Regardless it was fun.

On the Fourth of July, I took the train to Hoboken with my mom and brother and it was pretty damn crowded especially for the Hawthorne train station. My dad had asked me earlier in the week if I would help Bill's nephew, Ben, film for his Feelies concert movie. Ben and his friend (Nick, I think?) had attatched a camera holder-thing to a pole and I was instructed to put the end of the pole in my pocket and film from a little farther away than I had been standing, using the screen on the camera to keep track of the shot. Ben also had all of the Feelies go into the dressing room alone and he filmed each of them for five minutes, not asking them any questions or anything. When Bill came out he said, "I feel violated."

The show, again, was great, but my mom, brother, cousin, and I had to leave a little early to catch the 12:55 train back to Hawthorne.

The band actually had quite a bit of interaction with the audience during these three shows. These are come of my favorite cheers from the crowd and things that the band said: "Haledon fucking rocks!"
"Percussion god!" (at Dave)
"Let Stanley sing!" (the guy who said this actually asked me if my dad would be offended if he said that.)
Brenda: "Thank you." Someone in the crowd, "No, thank you!"
Glen: "Hey watch your mouth, my kids are here."
Brenda: "Did you guys see the fireworks?" Someone in the crowd, "No I'd rather be here!"

One thing I kind of regret is that I didn't take too many pictures of the band, but I was more focused on enjoying the shows. Unfortunately, most of the ones I did take I accidentally deleted. I did take some interesting artsy pictures though. 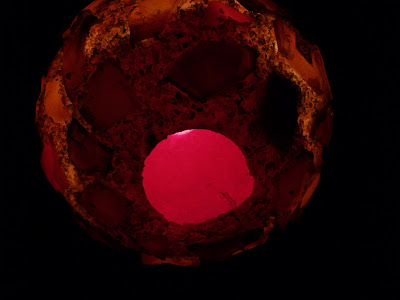 To close this entry, I'd like to say that you guys should checkout my friend Matt's blog because he has an entry about the Feelies shows. Also, if you do read his entry, it refers to Dave as Dave "From the Band" Weckerman. There is a reason behind this. You see, every time Dave calls mine or my cousin's house, he says "Hi, this is Dave from the band." So my brother, cousin and I call him Dave From the Band.

So yeah, see you guys at All Tomorrow's Parties!
Posted by Katie at 10:28 AM